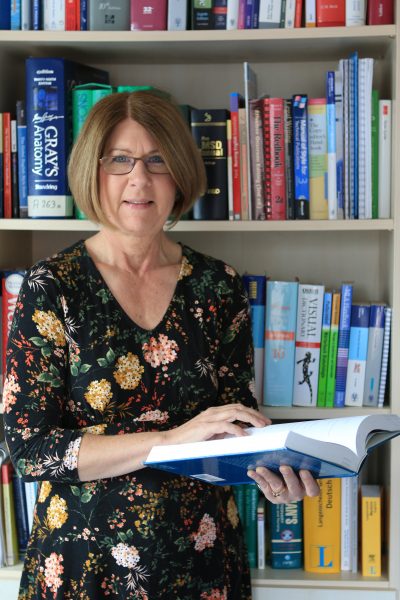 Where are you originally from?

Where do you currently live?

How did you become a translator/interpreter?

After earning degrees in German from Millersville University and Northwestern University (including a year studying in Marburg, Germany), I worked in New York City, first for the German Society of the City of New York and then for the Modern Language Association. I then moved to Geneva, Switzerland, where I did a one-year internship translating and writing articles for Lutheran World Information, the weekly newsletter of the Lutheran World Federation. I started my career as a freelance translator after I moved to Germany in 1984.

What are your areas of specialization?

My two main areas of specialization are international development cooperation and medical translation. I particularly enjoy translating hard core anatomy texts and medical and surgical reports. In addition, I have worked in translator training for the past 30 years. One of the highlights has been a series entitled “Anatomy for Translators” I designed and taught with my husband (an anatomy professor!), clinical practitioners and two different “into-German” translation instructors. It’s especially rewarding (and at times scary…) to offer courses in which medical professionals share in-depth information and seasoned translators and interpreters collaborate in translation workshops.

I am always blown away by the lengths to which ATA members are willing to go to help each other, whether it involves terminology or life problems. I am also impressed by the flexibility of the association when responding to changes in the industry, such as the current upheavals brought about by machine translation and AI-based chatbots. ATA and the German Language Division are working hard to represent the interests of our members by offering webinars and other ways to learn how to harness new technology to our benefit.

Tell us about your position on the GLD Leadership Council.

“Running” the GLD was the last thing on my mind two years ago when Ruth Boggs approached me to become the Assistant Administrator to Carlie Sitzman. I agreed to help out, not assuming that I would be holding the reins after Carlie’s decision to step down this past fall. I am so grateful to have an able-bodied “first mate” in Robin Limmeroth as the new Assistant Administrator. My main goal is to strengthen the bonds between our members through networking and educational opportunities. Nothing beats face-to-face communication, and we will be striving to make the ATA Annual Conference the highlight of our members’ year and offer lots of other ways for us to stay in touch in between.

I attended my first ATA Annual Conference in Toronto in 2004. I felt like a complete fish out of water, staying off-site to save money and suffering from intensive imposter syndrome. At breakfast on the final conference day I started chatting with another member. Turns out it was Ruth Gentes Krawczyk, who would later serve as GLD Administrator AND was my successor at the Lutheran World Federation 20 years earlier! Later, at the only regular conference session I have attended to date at which attendees were asked to introduce themselves, I met Barbara Müller-Grant, a fellow GLD member who lived a mere 7 km from me, across the Rhine River in Wiesbaden. Serendipity…

I play the violin, viola and piano and sing and currently play in a number of orchestras in Germany and sing in a vocal ensemble in the Netherlands.