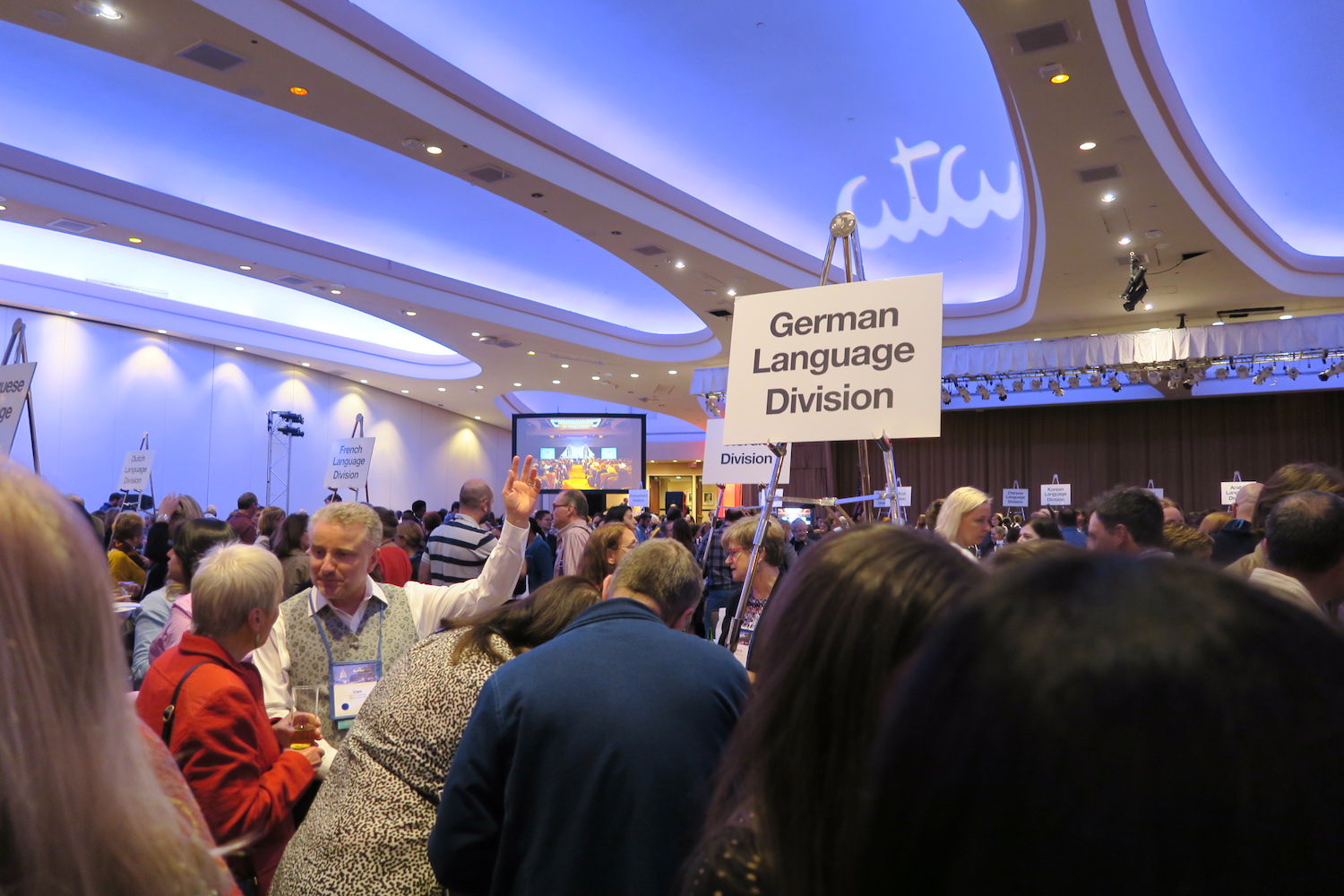 Now that some weeks have already passed and we find ourselves well into the Vorweihnachtszeit, I would like to take a break from translating to take a look back at the ATA conference in Washington D.C. As always, the conference week is a busy mixture of catching up with old friends, meeting many new people, learning new skills and concepts, and still finding some time to explore the city a little bit. That was true once again, and I also found myself spending quite a bit of time acting in my capacity as assistant administrator of the GLD this year. Here are two highlights.

First of all, our guest speaker this year was Karen Königs, an expert on English to German translation who offers workshops and seminars on translation focusing on contrastive grammar to associations like the BDÜ, DAAD and language schools. Mrs. Königs hails from the small town of Rösrath near Cologne, the very town where my brother-in-law lives. Small world! And even though she has worked with the English language for many years over her career, this was also her first visit to the United States. She had some lovely weather to welcome her, and she took full advantage of the trip to our nation’s capital.

I’ll admit that the concept of contrastive grammar was completely new to me before I walked into Mrs. Königs’ first session. Since I don’t work into German, I also initially thought that it might not pertain much to my own work at all. But I learned something new that day, and that it would most certainly help me to understand grammatical nuances of my own native language. Mrs. Königs demonstrated the translator’s options by very clearly explaining the various syntactic structures in both English and German. It is quite satisfying to learn the linguistic explanation for some of the choices we make every day. Later that same day, we held our GLD networking event on Thursday at the Goethe Institut on K Street, just about a mile from our hotel. After a busy day of sessions, GLD Administrator Ruth Boggs and I walked there, having been promised an easy 12-minute walk – Pustekuchen! We found ourselves quite out of breath and a little bit footsore by the time we got to the venue.

No time for a break, though, as the caterer had just arrived and we had only 45 minutes to get everything ready for the big event! Being a local and quite plugged in to the community in DC, Ruth found us the absolute best venue and catering company we could have ever wished for. After we’d spent many hours perusing menus and crunching numbers, the team of Matthew and Franz at Pure Perfection Catering put together an incredible spread for us. It began with an array of salads including Möhren-Lauchsalat, Gurkensalat and Krautsalat, followed by Wiener Schnitzel, Paprikagulasch and Bratwurst as the main course, with side dishes of Spätzle, Bratkartoffeln and Leipziger Allerlei. For dessert, they offered Apfelstrudel, Schokoladenmousse and Rote Grütze. The dishes were genuine German cooking, plentiful, and absolutely mouth-watering. I think many of the guests went back for seconds and thirds. I know I did.

Just a word about the venue, too. The Goethe Institut was hosting an exhibit on the mid-80s arts scene in West and East Germany, part punk rock, part social protest and subculture provocation. Concert photographs, fan magazines and album covers decorated the walls of the rooms along with information about the various bands and events of the time. Fascinating! Thanks to the strong interest in our networking event, around 85 people enjoyed spending a few hours in this ambiance, mingling with each other, re-connecting with old friends and discovering new ones.

If you are planning to attend the ATA59 conference in New Orleans, keep your eyes open for information on our next GLD networking event. I hope to see many of you there!