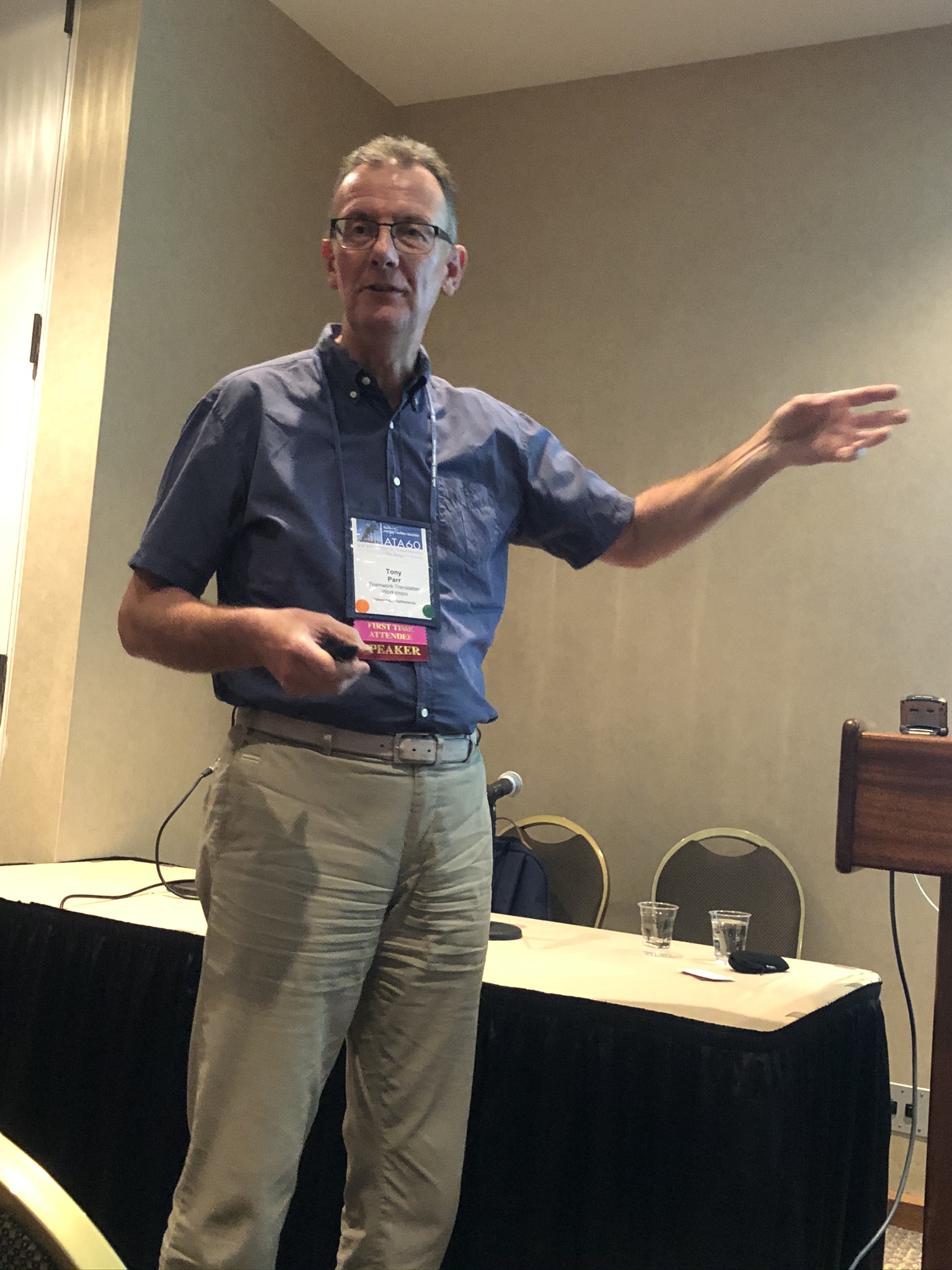 Photo by Mery Molenaar, published with the permission of Tony Parr.

This year the Dutch Language Division got two Distinguished speakers ‘for the price of one’. Marcel Lemmens and Tony Parr have been organizing workshops for translators together for over 25 years. For our conference, they came up with topics for two sessions.

On Thursday afternoon, Tony presented ‘The Translator of the Future is hiding in a Dutch Museum’, mostly in English. The presentation started off with some examples of the use of English currently seen on the streets in the Netherlands. We see a lot of mixes, where some words have been left in English and some are translated into Dutch, for example: ‘pumpkin spice siroop’. We also see the use of English grammar, while the words are translated in Dutch.

The main part of the presentation was the use of English translations in Dutch museums. Tony visited both the Scheepvaartmuseum in Amsterdam and the Frans Halsmuseum in Haarlem and looked at the translations next to the exhibitions. It was clear that the majority of visitors read neither the Dutch nor the English text. And of those who did, most did not read it in its entirety. Especially in the Scheepvaartmuseum, there were too many technical details in the explanations, which made people move on without reading it all. The conclusion was that a literal translation can be done by a machine, but it would be better if the translation were a completely different text, a summary rather than a translation. This is something that can only be done by humans.

Marcel’s session ‘How can our SSL model help you beat Translation Machines?’ took place on Friday morning, and was mainly presented in Dutch. Neural machine translations have risen and improved tremendously in the past few years, with DeepL.com, made by Linguee, becoming one of the leaders. Some people see this as a threat, whereas another school of thought believes that human translators will become more productive, and translations will become accessible to more clients. Marcel showed us an example of text that was translated by DeepL, Google Translate and a human translator. Translation machines learn from millions of examples and their translations improve over time through unknown algorithms. This means that the machine translation will be different on different days. For some websites, it is unnecessary for the translation to be perfect, and for those a machine translation will work just fine. Personalized text will be read more often, so it is important to apply the so-called SSL model: ‘stijl, samenhang, lef’. ‘Style’ is the choice between different ways of expressing a thought, making it for example exuberant or business-like. ‘Cohesion’ means that a text is not simply a string of sentences, but that it demonstrates unity, with each sentence referring to a previous one, thus creating a natural flow. Furthermore, a translator should have the ‘guts’ to intervene and add, explain and remove parts of the text as needed to improve the text’s readability. Marcel concluded his presentation with the additional suggestions to become a better translator by writing a lot, thinking like a human being and not acting like a computer, otherwise said by having emotions.

Photos by Leo van Zanten, published with the permission of Marcel Lemmens 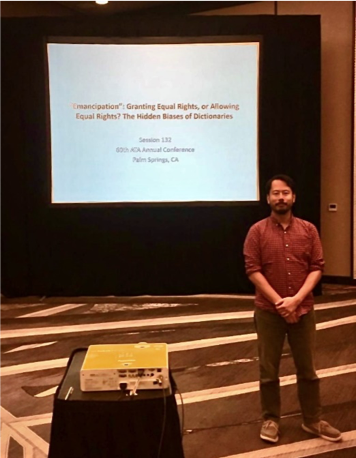 A third session involving the Dutch language took place on Saturday morning. Neil Gouw from the Dutch Authority for Consumers and Markets held a presentation about ‘The Hidden Bias in Dictionaries’. The title of the session: ‘Emancipation: granting equal rights or allowing equal rights?’ gave an example of what kind of bias was meant. Most words in dictionaries are defined from a heteronormative perspective, including LGBTQ terms. The questions are whether dictionaries can be truly objective and neutral and if we can all agree on one definition. Neil wrote to several Dutch dictionaries, such as Van Dale and Prisma, and asked them about their editors. Some ‘controversial’ terms for which definitions from both Dutch and English dictionaries were shown included ‘Ethnic Cleansing’, ‘Climate Change’, ‘Socialism’ and ‘Homosexual’. The conclusion is that no two definitions are exactly the same. Sources either empathized or left out aspects of the definition.