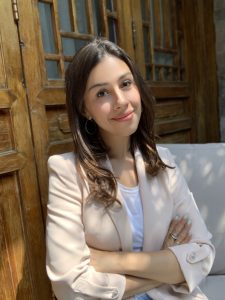 Sara Maria Hasbun (韩梅) is an American polyglot, entrepreneur and blogger. She is the founder and managing director of Meridian Linguistics Ltd., a language services company based in Hong Kong, China. She is also a fellow CLD member. Sara speaks four languages fluently and is knowledgeable in several others. The question is: how is Sara able to achieve all these?  Fang Sheng, the Editor-in-Chief of Yifeng, the CLD Blog, recently had a talk with Sara about language acquisition, and here are some strategies Sara shares with those of us who are striving to become multilingual.

Sara: Sure! My linguistic proficiency varies from year to year depending on what is active. Right now I would say I’m fluent in English, Spanish, French, and Mandarin. I am less fluent in Korean, but I can get by in most conversations. And the same goes for ASL (American Sign Language). Meanwhile, I can carry out basic conversations in Indonesian, Malay, Russian, and Cantonese.

Yifeng: Wow! We know you grew up in the U.S. as a monolingual English speaker, although your father is Hispanic. And you started to learn Spanish at a pretty “late” age. Did you have any early exposure to the Spanish language? Or if not, can you describe what it was like learning a foreign language as an adult? Did you ever struggle in that process? And what helped you the most in learning languages?

Sara: We always speak English at home. So I, unfortunately, had very little exposure to Spanish. In fact, I did not start to learn Spanish until I was in high school and had always kind of assumed that it would come naturally to me given my Hispanic heritage. It really didn’t! I struggled with learning the language, and I always felt like I had to put in twice as many hours as some of my more talented classmates. Eventually, it took me eight years to reach fluency in Spanish: four years in high school, and four years at university.  But as an adult, I think it was my training in linguistics that finally gave me the tools to learn a foreign language more efficiently. That, plus a few months living in Spain with total immersion.

Yifeng: What was the next language you tackled after Spanish? And what was the third and fourth and so on? What inspired you to learn one language after another?

Sara: Once I finally reached fluency in Spanish, I was elated! It had long been a major chip to my ego: being of Latino descent, I look like a Spanish speaker. Throughout my childhood, people would often speak to me in Spanish, and I’d be constantly reminded of my deficiency. So, when I realized that I had mastered Spanish, I wondered what else I could do! I went for Russian (which I’ve unfortunately since forgotten most of) and then for Mandarin, which I still speak fluently.

Yifeng: You speak several East Asian languages. For a native English speaker, what are the typical challenges in learning an Asian language? What are your strategies for overcoming them?

Sara: All Asian languages are hard in their own unique ways, but for Mandarin, the biggest challenge has to be the writing system for sure. For an English speaker, it is frustrating not to be able to use an alphabet as a building block like you can in French or Korean. But at the same time, the characters allow for an extra layer of puns and playfulness, so I suppose it is worth it!

Yifeng: We know you have a super busy schedule in terms of professional and business life. And you travel widely and actively. How do you find the time to dedicate to language learning? Can you describe to us your learning routine to allow for meaningful progress?

Sara: These days, I try to focus on one language at a time, whether I’m learning a new one or working on improving one I already know, and I try to set very clear goals (like “pass the HSK” or “record a video of myself discussing AI in French”). My favorite tool is italki: I use this language tutoring platform to find tutors that can help me address those very specific needs. I book my lessons on a weekly basis so that I have a good sense of my schedule and what kind of time I have. Other than that, I try to consume as much content as I can in the languages I’m learning, including from social media such as podcasts, television series, etc.

Yifeng: You obviously have lived in countries of the languages you are fluent in, like Korea and China. But for those languages that you’ve learned without the “native speaker environment”, how do you ensure good progress, especially in speaking?

Sara: I never had the chance to spend extended time in France, so I had to essentially create my own immersion environment (and I have to keep recreating it so that I don’t lose my French). I used italki tutors and also asynchronous language exchange partners on Tandem to get as much practice as I could. I’m not usually a huge fan of language exchange partners, but I like that on Tandem you can have asynchronous text or voice conversations, much more like texting your friends, it feels more natural and less forced. Now I’m lucky that I have enough Francophone friends and colleagues that I naturally get a lot of French exposure throughout my workweek.

Yifeng: Can you share some advice for those of us learning a third, even fourth language? (Like I’ve been learning German for four years now, but I’m still struggling with its sentence structure.)

Sara: The most useful advice I can give you is to identify a clear goal and try to tailor your study plan to that. I think a lot of people struggle in learning a foreign language because they don’t realize that language ability actually comprises an infinite number of sub-abilities: listening, reading, speaking, comprehending, …those are disparate skills and require very different strategies. You can’t learn to speak if all you do is read. You can’t learn to read if all you do is speak. And if you want to be able to talk about AI, you need to practice talking about AI. If you want to be able to flirt in a bar, you need to practice flirting. Therefore you should identify the skills you aim to acquire, and then develop a plan accordingly.

Yifeng: Thank you so much for sharing with us, Sara! I’m sure these strategies are really helpful for our fellow language learners. Though our blog has only limited space, Sara has many more tips than what we can highlight here.

Sara: Yes. I’ve got lots of more tips on my blog, misslinguistic.com, and resources on meridianlinguistics.com. I also post a lot about language learning on my Instagram page (misslinguistic).

Yifeng: Your blogs also list useful resources for various languages, all based on your personal research and learning experiences. Language learning is a life-long journey and a daunting task. It entails lots of hard work and dedication but at the same time can be so rewarding. Thank you again, Sara!