How did Hangeul nal come to be and why should we remember it? 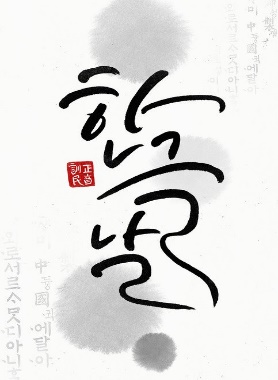 Hangeul nal (한글날), also known as Korean Alphabet Day, was initially made a national holiday in South Korea in 1945. After several amendments, it is now celebrated as a public holiday on October 9th. Hangeul (한글) was created by King Sejong in December 1443 (the 25th year of his reign) and published to the general public on September 29 (the 28th day of the ninth month by the lunar calendar), 1446.

Before King Sejong invented Hangeul, it was hard for the everyday man to express himself in classical Chinese characters. Only a handful of educated elites were able to express themselves in written form. Most official documents were written in a form that could not be understood by the general public, like farmers and the uneducated poor. The publication of Hangul provided a means for the general public to communicate better and helped generate popular literature that everyone could easily write, read and enjoy.

Korean is often considered to have the most logical writing system in the world, which makes it easy for beginners to learn and read. Hangeul or Korean has 24 letters, with 14 consonants and 10 vowels. The way Korean letters are written is said to reflect the mouth or tongue’s position when the speaker pronounces the sound of each letter.

The value of Hangeul and Korean culture

It is said that language and culture are intertwined, and learning a new language not only involves learning its alphabet and grammatical rules, but also learning about the specific society’s customs and behavior.

Fast forward 573 years to 2019. Korean as a language has not only gained international interest but Korean culture has become an important player in world affairs as well. K-pop, movies, dramas, literature, Korean beauty, fashion cosmetics and BTS and “Gangnam Style” before them have gained much global attention.

Korean has certainly come of age since King Sejong’s days. What does Hangeul nal mean to you? What does your language mean to you?

Hope everyone is doing well and off to a good start for the new year!  This year’s ATA

Annual Conference will be in Palm Springs, California on October 23-26, 2019. And it’s time to start preparing proposals for the conference!

I would like to ask you to consider submitting session proposals to the ATA. Approved speakers will gain professional recognition and networking opportunity among colleagues and receive a significant discount on the conference registration fee.

If you would like to give a presentation at the ATA, please consider submitting your proposals to the KLD Conference Committee first. You can email your KLD session proposal (100 words or less) and your bio (100 words or less) in a Word file to me at KLDnewsletter@gmail.com by February 22, 2019 to allow plenty of time for feedback and revision before you submit the proposals.

The KLD Conference Committee is here to help you: to review and provide helpful comments to the speaker that will increase the chance of getting the proposals accepted.

Please make sure to refer to the following ATA webinar before you write a proposal.

How to Write a Winning ATA Conference Proposal

Speakers only need to submit a proposal, not the actual presentations, to the

ATA by March 2, 2019. (Always check the ATA website for the official/exact deadline.) ATA will notify the speakers regarding approval status in early summer. When his/her proposal is approved, a speaker will have about 3-4 months to prepare for the actual presentation until the ATA Conference in October.